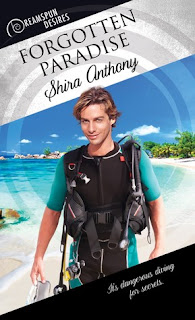 When a mega company threatens to take over his family-owned business, programming prodigy Adam Preston escapes the stress with a much-needed vacation in the Dominican Republic. There he meets attractive, intelligent, insightful Jonah James, a scuba dive instructor, and what starts as a holiday fling soon blossoms into much more.

But Jonah has a secret: ten years ago he woke up on an island beach with no idea how he got there… or even who he is. Their paradise may not be as perfect as it seems. When Jonah’s memories come crashing back like waves on the sand, will it be Adam clinging to the proverbial life raft, or will the two men find a safe harbor to ride out the storm?

The dedication to this book is exactly why I read and enjoy the hell out of this series. I adore romance and the ride it takes me on. This series is simply fun and romantic and I will never get enough.

Adam Preston is on vacation in the Dominican Republic by the order of his sister in an attempt to relax and unwind from the chaos that is currently his professional life. Adam is the CEO of his family’s company that he took over after the passing of his father. When Adam began developing apps for Prestco Inc., the company showed profit and now a big Silicon Valley company, Entech wants to buy them out. The problem with that is Adam isn’t sure he wants to sell and he has his brother, mother and sister to consider in the offer too. It’s a good thing he’s on a beach vacation and loves to go diving. It’s also a good thing that in order to dive, he needs an instructor from the hotel to go with him.

Review: Under Pressure (No Pressure, No Diamonds #1) by Kara Greenan 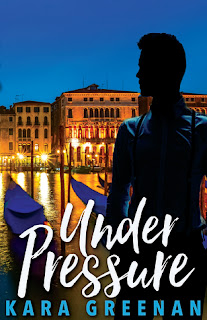 In the dangerous world of high profile theft, love is often a fantasy the wealthy and naive are sold. Grifter Sebastian Walker sells love like nobody else, leaving a trail of vacated bank accounts, empty champagne bottles and broken hearts in his wake. The one heart he never meant to break was London’s.

Considered by many to be the greatest thief of his age, London favours a minimalist life, devoid even of a surname. He lives for the next job, liberating art from museum walls and prized treasures from collector’s vaults. When he and Sebastian collide in Venice on a con to steal a priceless copy of Michelangelo’s David, the unthinkable happens: they begin to fall in love.

A long, lonely year later, Sebastian emerges as a new member of London’s team of world-class thieves. London knows he can’t trust him. Sebastian lies, better than anyone else, for a living. Sebastian wonders how he could ever entrust something as precious as his heart to a born thief. But as they team up for another perilous heist, they discover the true value might not be in the diamonds they’re stealing, but in each other.

There is something about a story that has a MC who is a thief that gets me. It’s the romanticizing of someone doing something so blatantly illegal and how much they get off on the thrill of it all. Them getting off helps this reader engage in the story and if you toss is a grifter, a professional con man as the thief’s love interest well then, just call me a goner. This book, this romance, this heist… I was gone for it so damn fast.
London is a thief, Sebastian a professional liar. Long story short, they’d never work out.
Told in dual POV’s as well as past/present storytelling, we get the story of London and Sebastian. As we first meet London, he is doing what he does best… balancing and planning as any young and infamous cat burglar would do when a huge heist is his next job. With his team of intelligent and bad ass misfits (Amelia, Hale and Frankie) they have the perfect plan to steal diamonds but are sadly missing one important piece; someone to distract the guards. When Frankie suggests they call in Sebastian Walker, London throws a fit and crawls out a window. Literally. He is all about taking the high road or at least the highest roads possible to get around town and he wants to get as far away from the idea of being near Sebastian again. Though he doth protest, he does it too much and we get the why of London’s unwillingness to work with Sebastian.
See Full Review 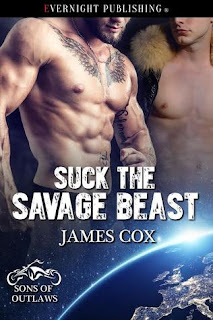 Earth beasts are sexier than he expected…

Welliver is a scientist first and an Outlaw MC member second. He’s the smartest man in the crew that’s exploring earth to create a new home. But when a monster attacks them and he’s separated from the crew, he is saved by a savage and sexy beast.

The beast doesn’t remember his name. He was sent to the earth prison when he was just a boy but was left behind when the prison was evacuated. Beast has spent nearly twenty years alone on earth, trying to survive this dangerous world. He’s animalistic and maybe the best hope humans have for staying alive with these new threats.

Beast doesn’t understand it’s not okay to lick strangers, or the whole wearing clothes thing but neither man is prepared for the attraction between them. Welliver will have to pull on his Outlaw MC heritage to endure the wilds of earth but how will survive the savage beast?

I ask you, how does one not buy this book for the title alone?

Beyond that, I loved this installment of the Sons of Outlaws series. If you’ve been following along, and you should be, the Sons of Outlaws are in the process of relocating to Earth from Mars. Mars is becoming uninhabitable and the there’s a small scouting crew that has landed on Earth to check the viability of the place and to get some prepwork going. In Suck the Savage Beast we get to know Deviant and Tage’s kids Welliver and Lily. I have to say, it was pretty awesome how Deviant’s kids turned out. They aren’t much like Deviant at all, but the family vibe is strong. Tage is back on Mars so it’s just Deviant and his kids on Earth along with a few others.